A few years ago, my publisher told me a conversation he had with a neighbor who didn’t read the newspaper. He asked where she got her news. She responded, “Facebook.”

That answer baffled him because he wasn’t active on the social networks, but I got it. Friend the right friends, like the right pages or follow the right people on Twitter and you can find out just about everything that’s going on in the world.

Last night, Fox 8 did a piece on the dangers of using social media to discuss politics. The premise of the report was that it’s a terrible idea to talk politics on Facebook. “You’re not going to change someone’s political beliefs through a Facebook post,” said Scott Dickson with Dickson Interactive, a website and social networking consultant company, in Winston-Salem…. “If you interact with the public at all then it’s my opinion just keep quiet about these kinds of things let your vote be your voice,” said Dickson.

Even though the headline of the piece says “experts,” plural, its sole source is Scott, who is my friend. And, for my money, he’s wrong. (I’m a little surprised that Fox 8 didn’t get another social media expert to counter Scott’s ideas rather than simply letting them stand. After all, in practice, Fox 8 doesn’t agree with them, as it posts links to political stories and permits a free-for-all in the comments.)

I admit that I’m biased. I post about politics. It’s a topic that interests me. I like to read the links that others post because I usually learn something. For instance, the first places I’ve seen the fact-checking articles about the Republican and Democratic speeches at the conventions were on Facebook and Twitter. Those informed my opinions about what was said in Tampa and Charlotte.

I’m also biased because I don’t like others putting rules on how social media “should” be used. Facebook and Twitter give us enough rules. So, when Scott says that social media sites are for people who want to have fun with friends, I must respectfully disagree. I have fun with friends and we talk about all kinds of things. But eliminating politics from the discussion? Well, Arab Spring, anyone?

Update: Scott responds to this post in the comments. He also points out the WFMY did a similar story a day later. It, too, is a one source story. It’s recommendation, however, is one that is closer to where I am.

There is a lesson for news sites in the knowledge that two of the 10 most read local stories on myfox8.com for the year involve station employees. The 10th most read is the announcement that meteorologist Emily Byrd had a baby. The second– second! — is a report that photographer Chris Weaver was attacked by a stick-wielding man, which Chris got on tape. (The others are the more typical online fare of death, sex and news of the weird.)

The interest in these two stories isn’t insignificant. I don’t know Fox8.com’s total traffic numbers, but I suspect they are high. The station has nearly 100,000 Facebook fans, easily outpacing every other media website in this market.

What should news websites should learn from this? Sorry to disappoint, but it’s not to get someone on staff pregnant. It is that personal connection sells, particularly on the web. The web is all about connection, and personality helps people connect. Journalists intuitively know this to be true, although many of the “capital J” journalists resist it. People feel they know Emily Byrd through her weather reports, they have watched her through her pregnancy, and they are interested to see the “end of the story,” if you will. They have emotionally connected. People don’t know Chris Weaver — I met him when he interviewed me from behind the camera a couple years ago; he’s a great guy — but the video certainly struck a chord with thousands of visitors.

Let me be the first to point out that I’m late to this realization. Too late, actually, or I would have come up with more effective ways to make the News & Record’s site more personable while I was there. Don’t get me wrong. The site is good; it won first place in General Excellence in last year’s N.C. Press Association contest. But as fans of “Friday Night Lights” know, good reviews don’t necessarily bring in the ratings.

Every newsroom I’ve ever seen is filled with inventive, resourceful and irreverent people. While they may not all be showmen, many can be, if given the chance. Some things I should have done:

* Introduced video editorials with one person serving as anchor.

* Introduced a two-minute “Daily Show” segment having fun with the news of the day, including making fun of N&R gaffs. (I doubt we could have pulled it off every day but maybe two days a week?) 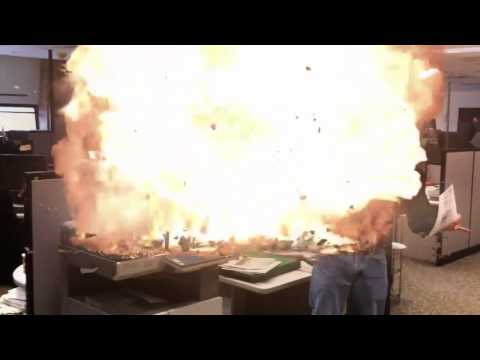 (This is photo director Rob Brown in tne News & Record newsroom play acting with an app that adds special effects to video.)

* Assigned someone to do interesting, non-journalistic videos around town. We send photographers to find “good art.” Why not good video? I’d start with kiddie kicker soccer “games.” If you don’t think those are funny, one of us needs funny lessons and it ain’t me.

* Built some video presence around a pretty female. (Yes, I know that it’s politically incorrect, but it would get traffic. Why do you think so many beauty pageant contestants end up on television?)

* Assigned one of our more charming writers to create an online only column of short, interesting observations. Like a fun Facebook feed. And maybe start a fictional serial.

* Tim Rickard is a multi-talented artist. He does a syndicated comic strip, editorial cartoon, The Jokes on You and a variety of illustrations and graphics. I’m not aware of him ever turning down the opportunity to do something fun and different. I should have turned him loose on the web with Flash and freedom to create. The thought is scary.

* After all this, marketed the heck out of the personalities, just as television does.

There are many more possibilities; I hadn’t even started with engaging people in the community.

I know the reasons all the reasons news sites don’t do things like this. I should; I said them myself many times. Who has the time? Who has the money? What are we going to give up? I wish I had tried harder and made some of the tougher decisions because the myFox8.com website traffic shows it would have made a difference.